From Sandra Blow’s abstract artwork to a bronze dog bought on a childhood holiday, interior designer Tobias Vernon shares his love of ‘casual collecting’ and gives us a glimpse inside his own home

For interior designer and founder of design emporium 8 Holland Street, Tobias Vernon, collecting is a way life. His London treasure trove – a shop/ gallery, which opened in 2018 and is tucked down a side street in Kensington – is carefully cluttered with a charming mix of mostly mid-20th century European and Scandinavian art, studio pottery and furniture. All is sourced from warehouses, auction rooms, markets and dealers around the UK, Italy, France and Scandinavia. Along with a second space in Bath, which opened in 2019 and is similarly curated – ‘an easy-going medley of stuff’, as Vernon calls it – it serves as a pretty good indicator of the laid-back, unfussy aesthetic that has made his name. It turns out that the designer’s retail spaces have also proved fertile ground for his own home, a compact 18th-century worker’s cottage in the Somerset village of Mells, which offers a similar ‘cabinet of curiosities’ feel. ‘It’s probably no more than 600sq ft,’ says Vernon, who moved in late last year. Perched on a grassy verge in the village, one enters into a tiny hallway, an eat-in kitchen to the right, a sitting room to the left, with stairs in one corner that lead up to two bedrooms divided by a bathroom in the middle – that’s it.

Vernon takes a refreshingly relaxed approach to designing his own home: a few simple sketches to place the larger pieces of furniture, but the rest was ad hoc. He began by painting the entire place white, adding a natural sisal carpet all over the house, aside from an industrial-style green rubber in the kitchen. It’s the ideal bright, neutral backdrop for his collection of furniture and art. 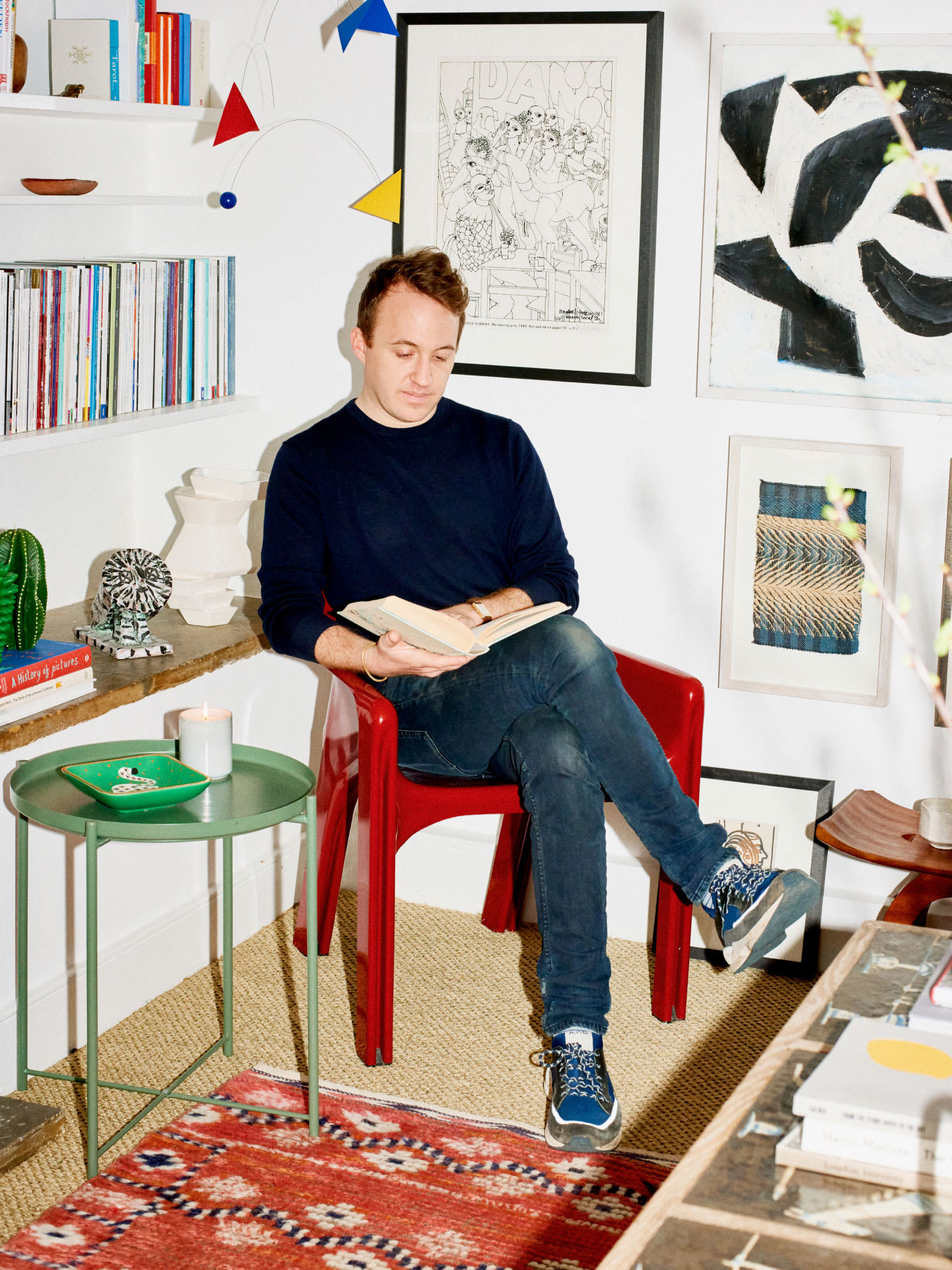 Tobias Vernon in his home 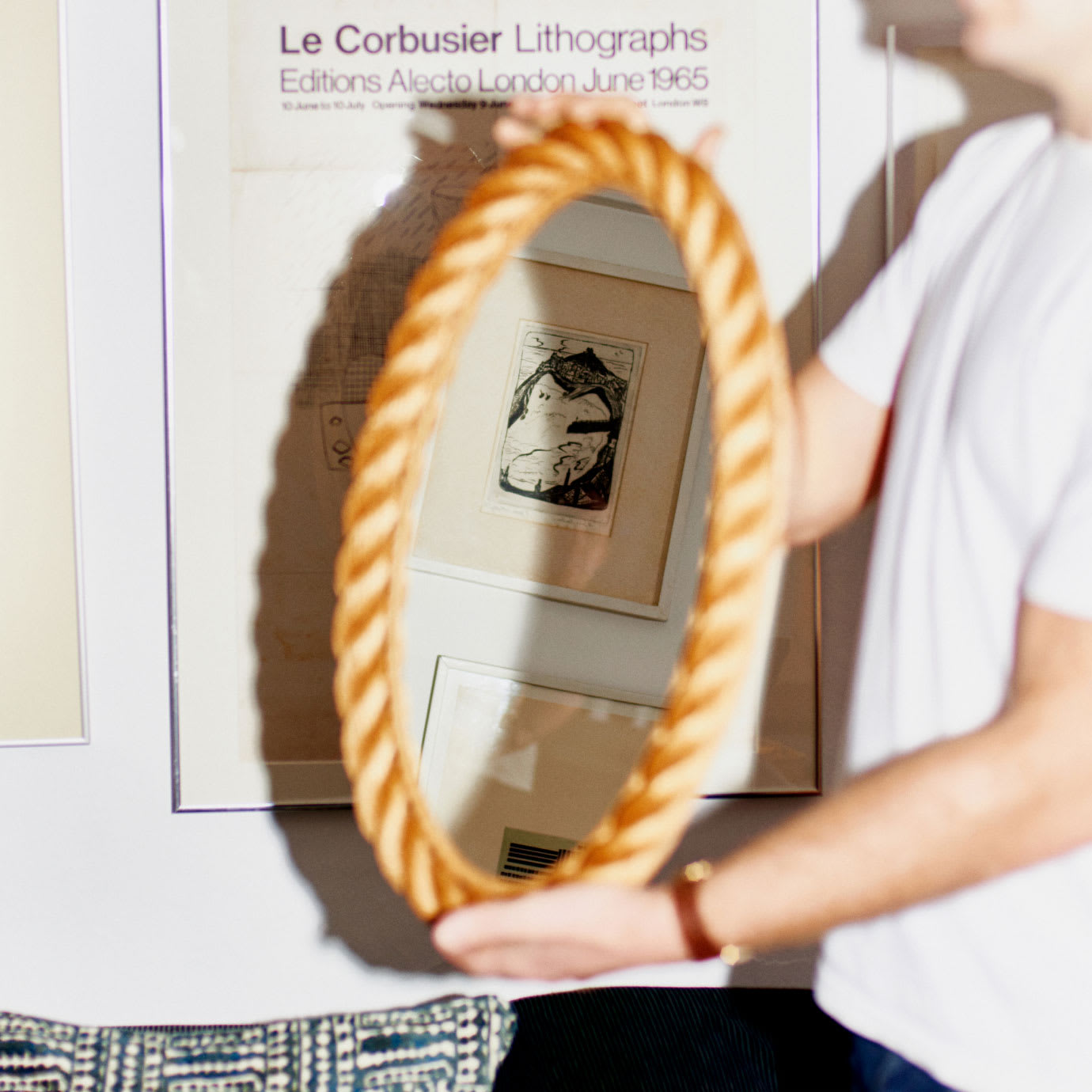 ‘His sourcing ethos: buy whatever you love and be confident that it will work in your home’

‘I wanted some kind of symmetry,’ he explains. ‘So, there is a nod to the traditional rooms: a sofa opposite the fireplace and the shelves on either side of it. A corner kitchen and my dining table in front of the stove. I wanted to balance things, but then not entirely – I like it nicely deconstructed. That’s what I do with clients and in the galleries, too. It’s about that easy placement of things and not having them necessarily remain in that one fixed place.’ He does imperfect rather perfectly in that regard.

Vernon, who was raised in St Ives, Cornwall – you can see the influence of British modernism everywhere – studied art history at Cambridge. Visits to Kettle’s Yard, the former home of collector and curator, Jim Ede, have clearly left their mark. ‘Kettle’s Yard, plus Charles and Ray Eames’ house in LA and Peggy Guggenheim’s place in Venice – all of those crazy collections are my favourites,’ explains Vernon. ‘They’re idiosyncratic: really unexpected things in different mediums, styles and periods, and of different values. A Brâncuși sitting on a piano next to pebbles – it’s wonderful. The windowsill in my living room is a nod to Kettle’s Yard.’ It features a white candelabra bought at The Conran Shop when Vernon was 15, a vintage glass decanter found in The Lanes in Brighton, a white plaster lamp by contemporary maker Viola Lanari and an English cut-glass coupe. 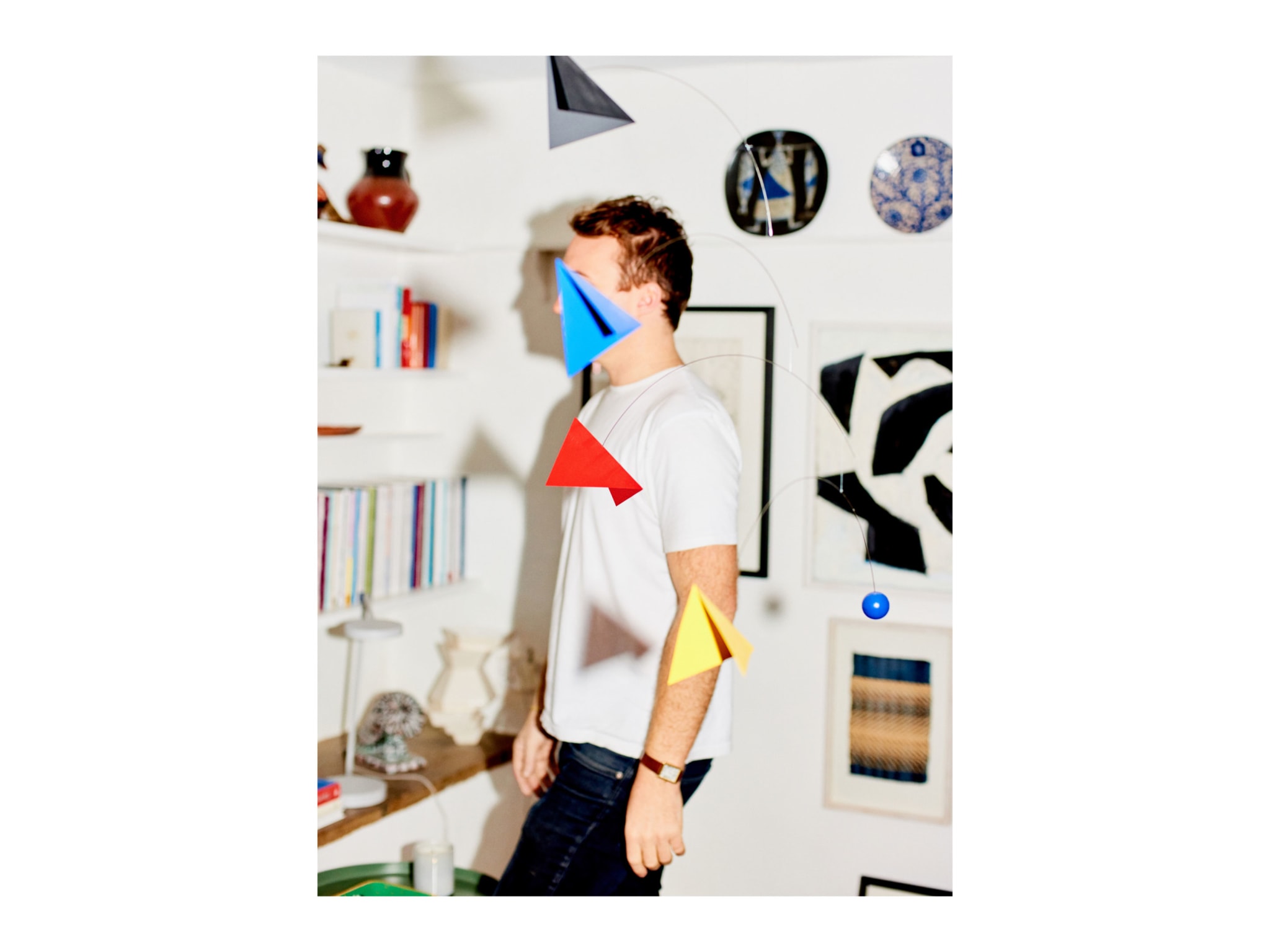 Ask Vernon to name favourite pieces around his own home and he lights up. The oak and ceramic, tile-topped, 1960s coffee table found on a buying trip to Sweden was destined for the gallery. ‘The truth is, I fell in love with it. Any excuse for more art – you don’t expect those figures on the surface of a coffee table,’ he says. The same goes for the Maralunga sofa by Vico Magistretti for Cassina. ‘I actually found it on 1stdibs, but it was a bargain.’ Magistretti’s red, moulded plastic chair, says Vernon, is another happily unexpected addition across from the Paolo Buffa wooden arts and craft-style armchair in the sitting room. As is the contemporary, metal, Ikea tray table right next to it. The various Noguchi paper lanterns are reminders that Vernon really knows his design classics. The painted Habitat four-poster bed upstairs tells us he’s easy about where things come from. A kitsch little bronze dog on a plinth looking at a moon that lights up, found on a childhood holiday, sits happily on a kitchen nook.

It turns out that Vernon didn’t need to buy much for his cottage and, in fact, his years of casual collecting have finally come up trumps. ‘There are things my parents gave me – my mother’s old work table is now my dining table,’ he explains. ‘I had some lamps stashed in bags for years [that I] bought from markets – I just needed somewhere for them to go. I’ve loved finding homes for my artwork and furniture here. All of the existing weird recesses and the shabby shelves are perfect for my small curiosities.’ The wooden mantelpiece in the kitchen became the obvious place to lean Vernon’s ceramic tile picture of people squishing grapes, found in a Frome market years ago. 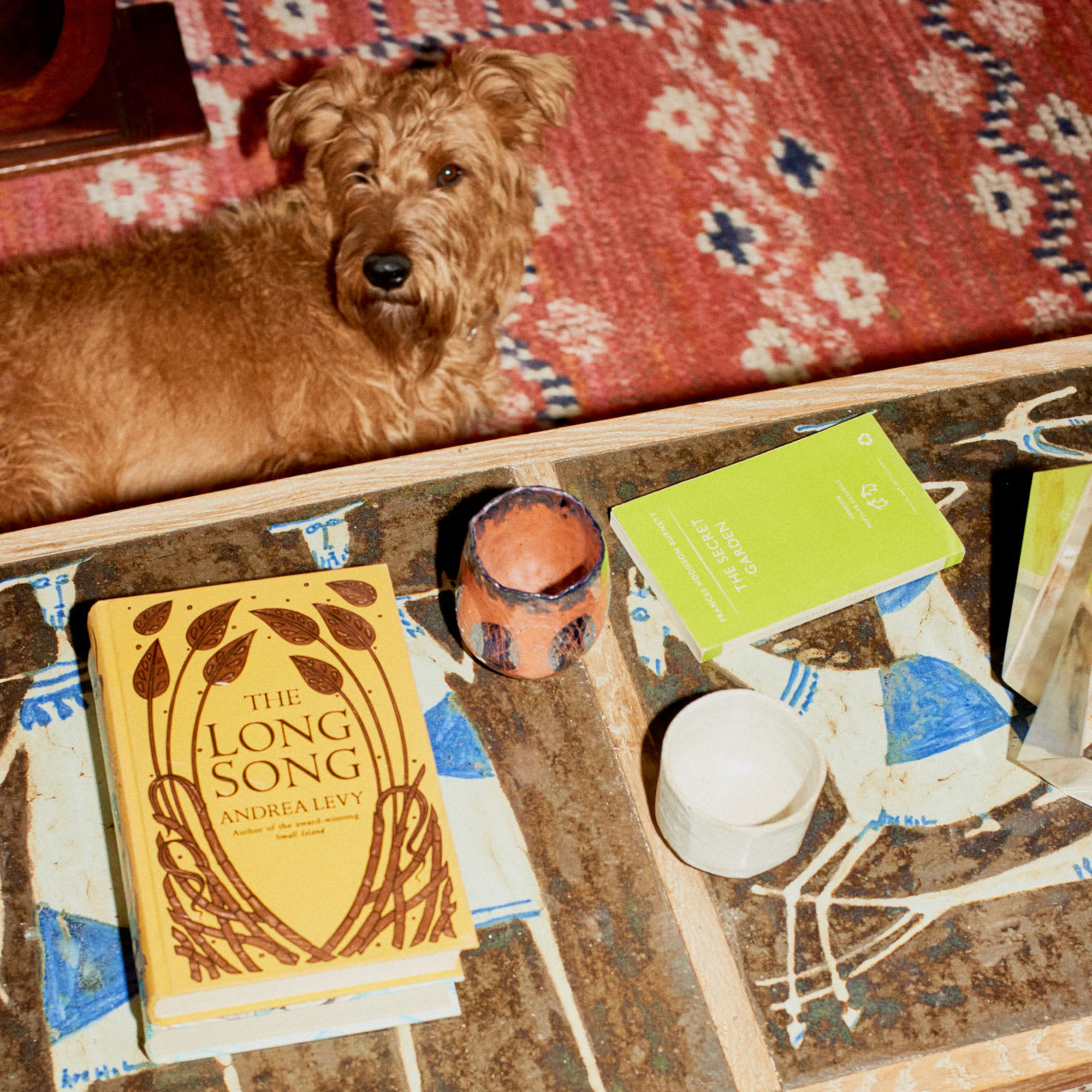 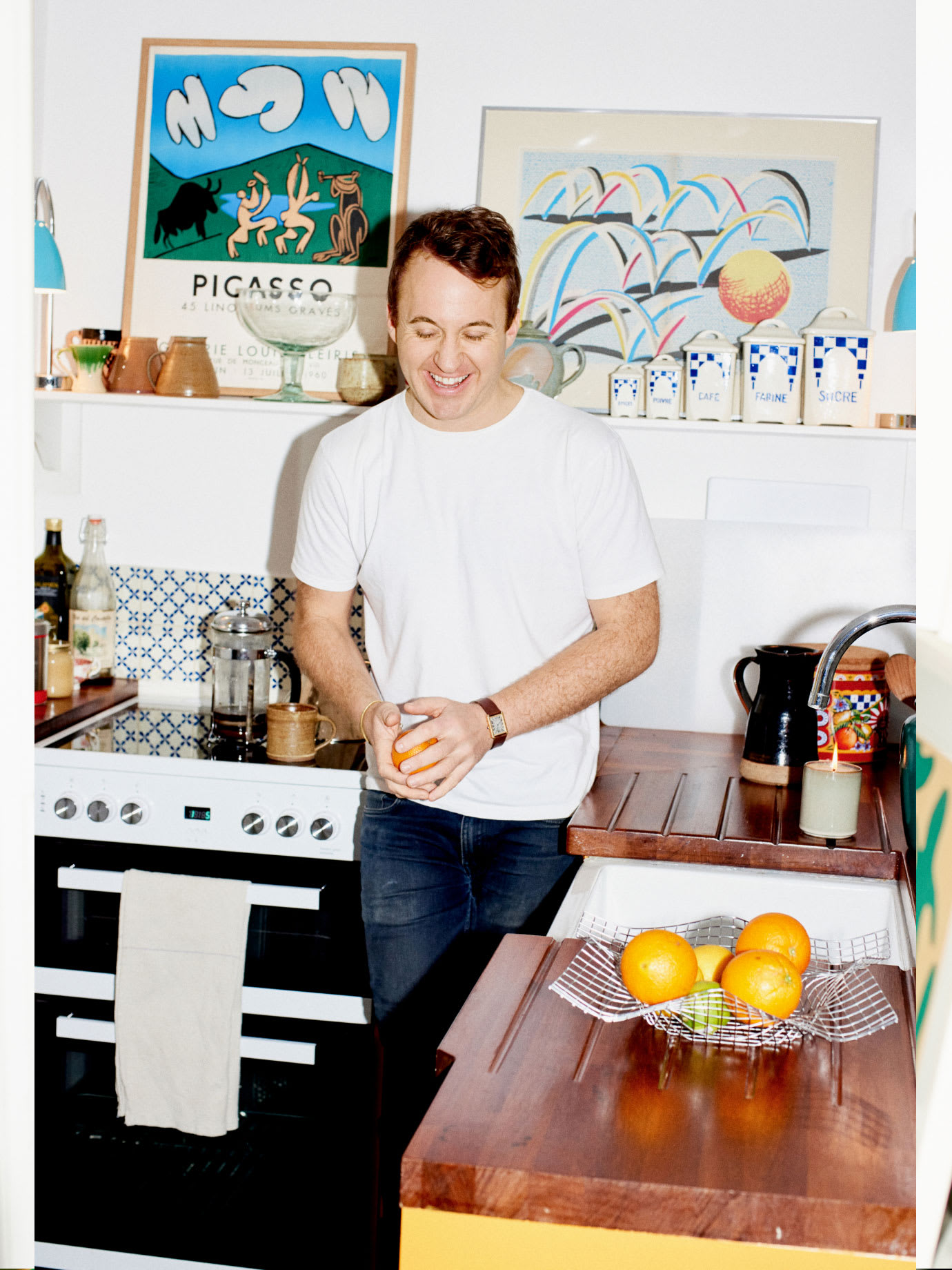 Much of Vernon’s art collection is of fairly disparate provenance; some valuable from named artists and some just the things he loves. This sums up his sourcing ethos: buy whatever you love and be confident that it will work in your home. There’s the abstract Sandra Blow print above the fireplace, bought at auction, and a 1965 Le Corbusier exhibition poster that Vernon’s father found on eBay from a long-gone art publishers who were, coincidentally, based at 8 Holland Street years ago. ‘I hung the wall of pictures in the sitting room myself. I probably could have made it all perfect, but actually the unevenness is quite fitting for the vernacular of this house.’ The centrally placed black and white oil painting by Swedish modernist, Bo Beskow, works beautifully close to the subtle etching of St Ives harbour by Jane O’Malley. ‘That was in my house growing up and my parents gave it to me a few Christmases ago. I’m definitely not a minimalist and I want to have things around me that remind me of travels and my friends, family, work and life. You want everything to feel effortless and relaxed; you also need to make some sense of the chaos. I find a little respite in this setting. The imperfection is the antidote to the rest of our lives.’ 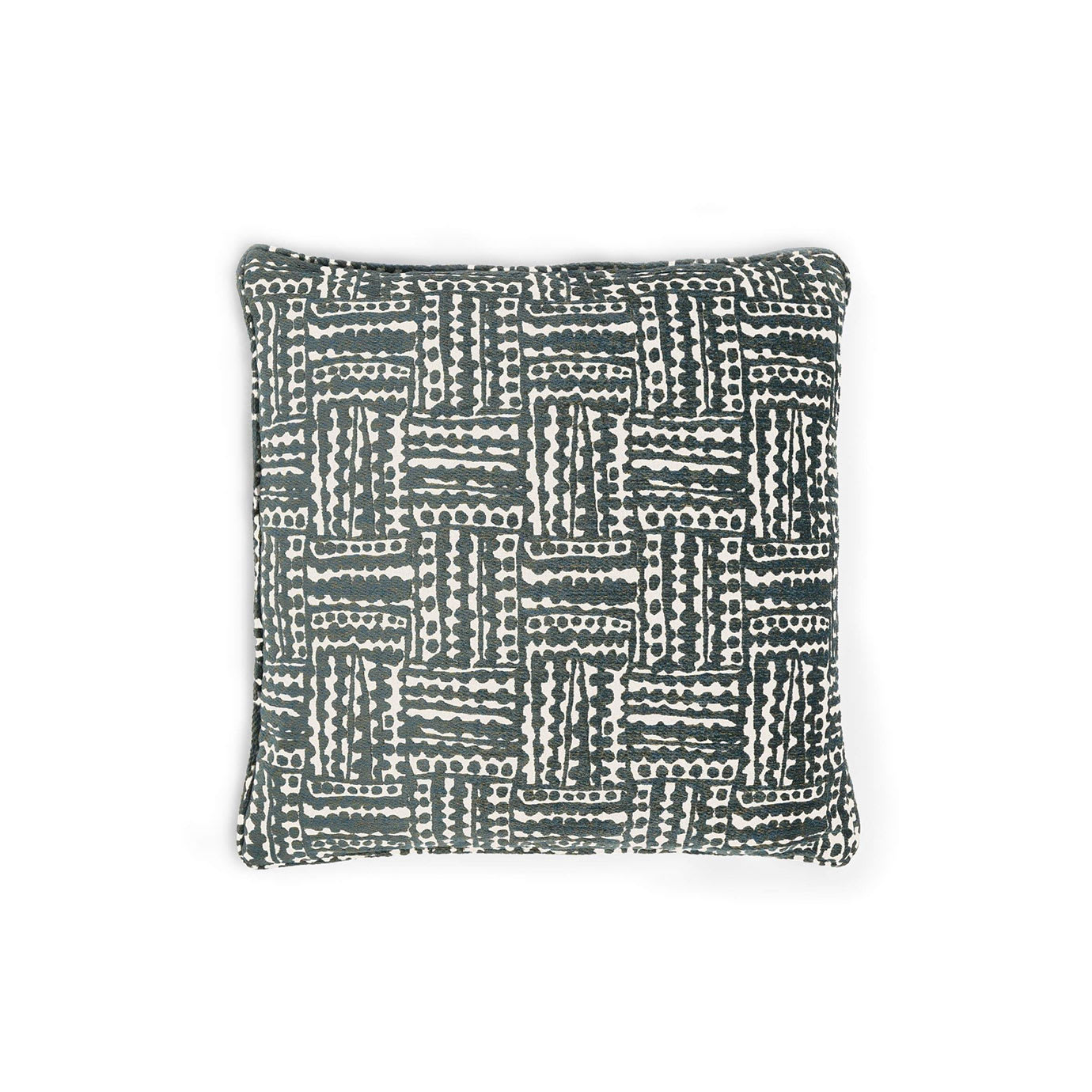 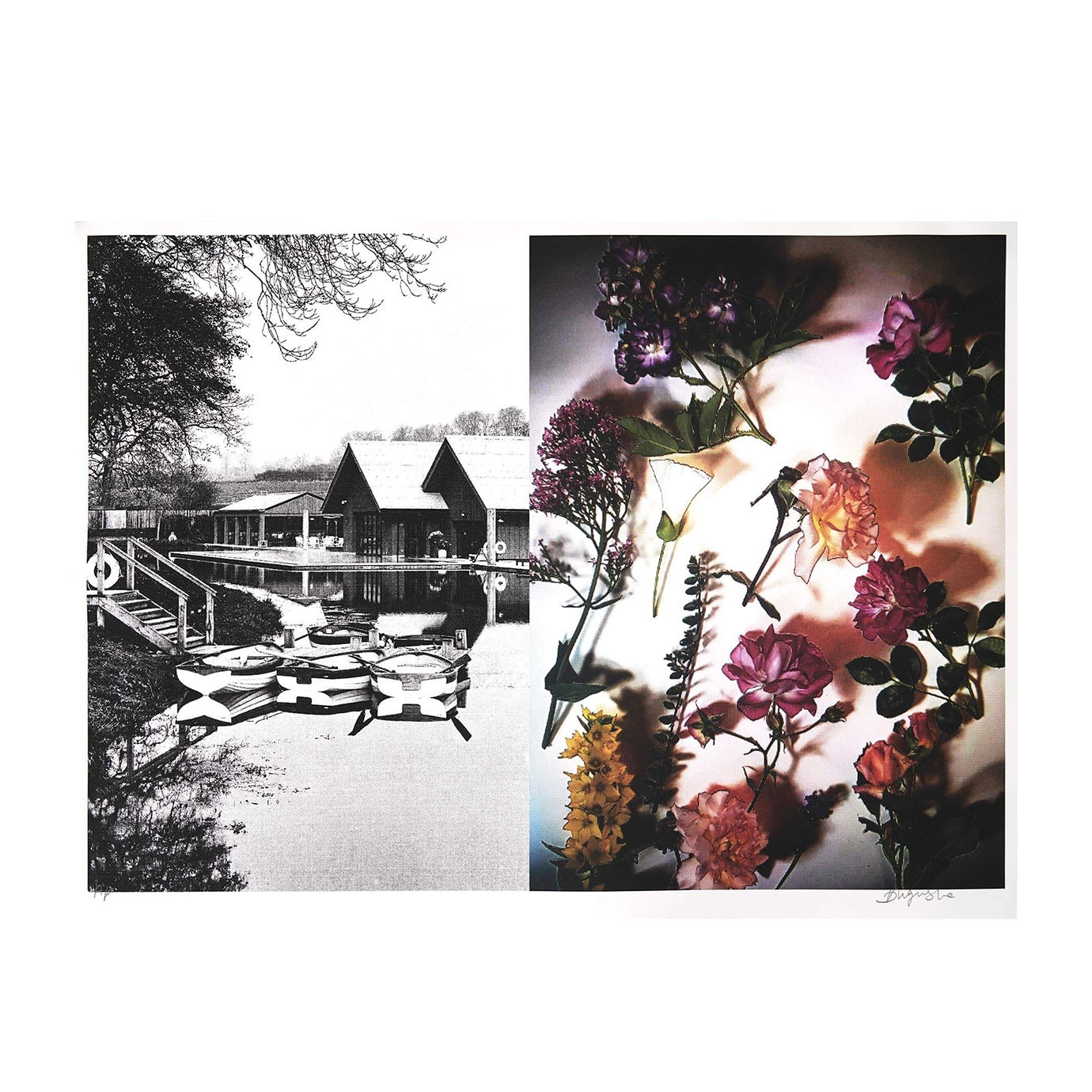 What Does It Take (To Win Your Love), Danny Augustine 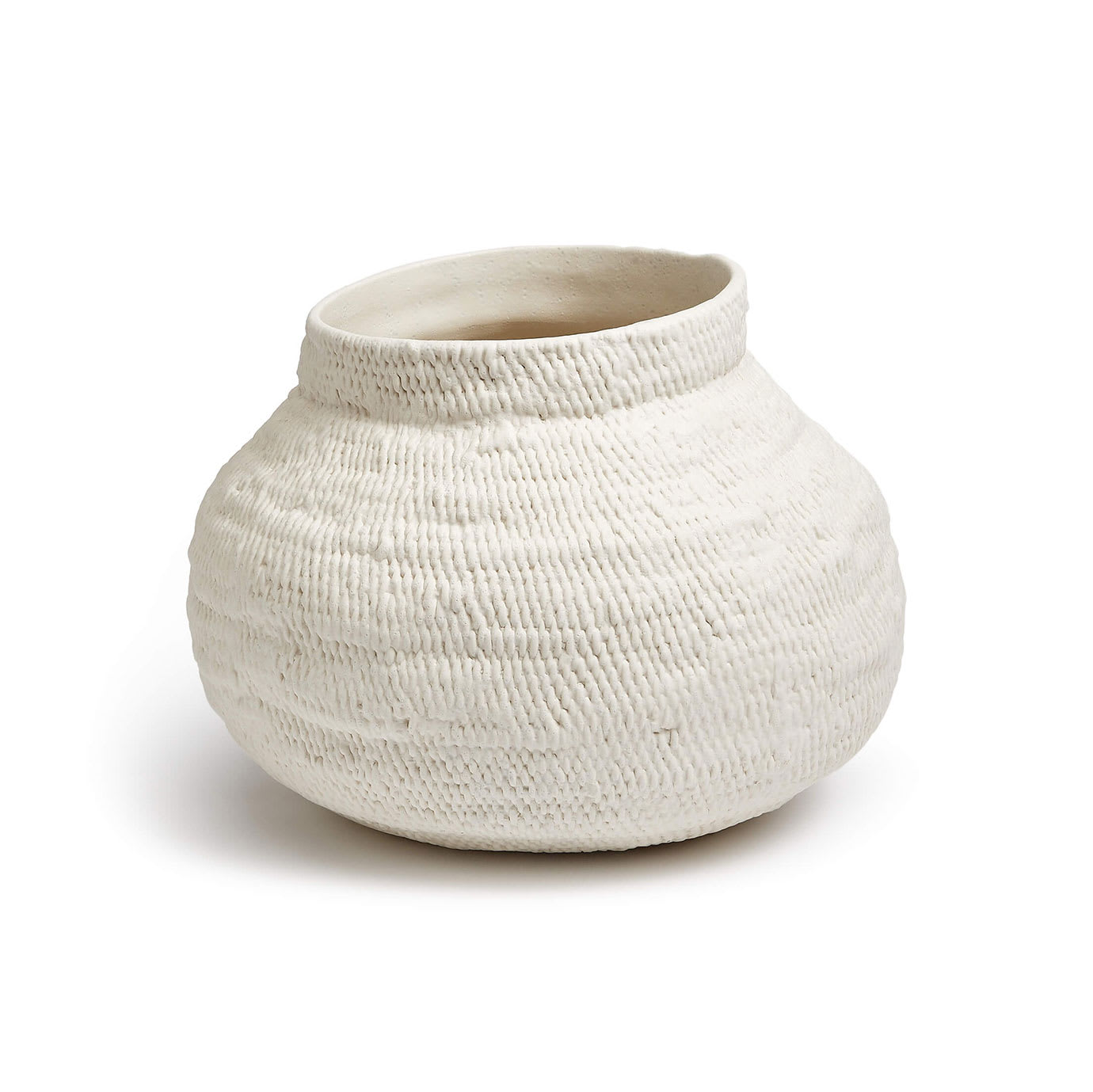 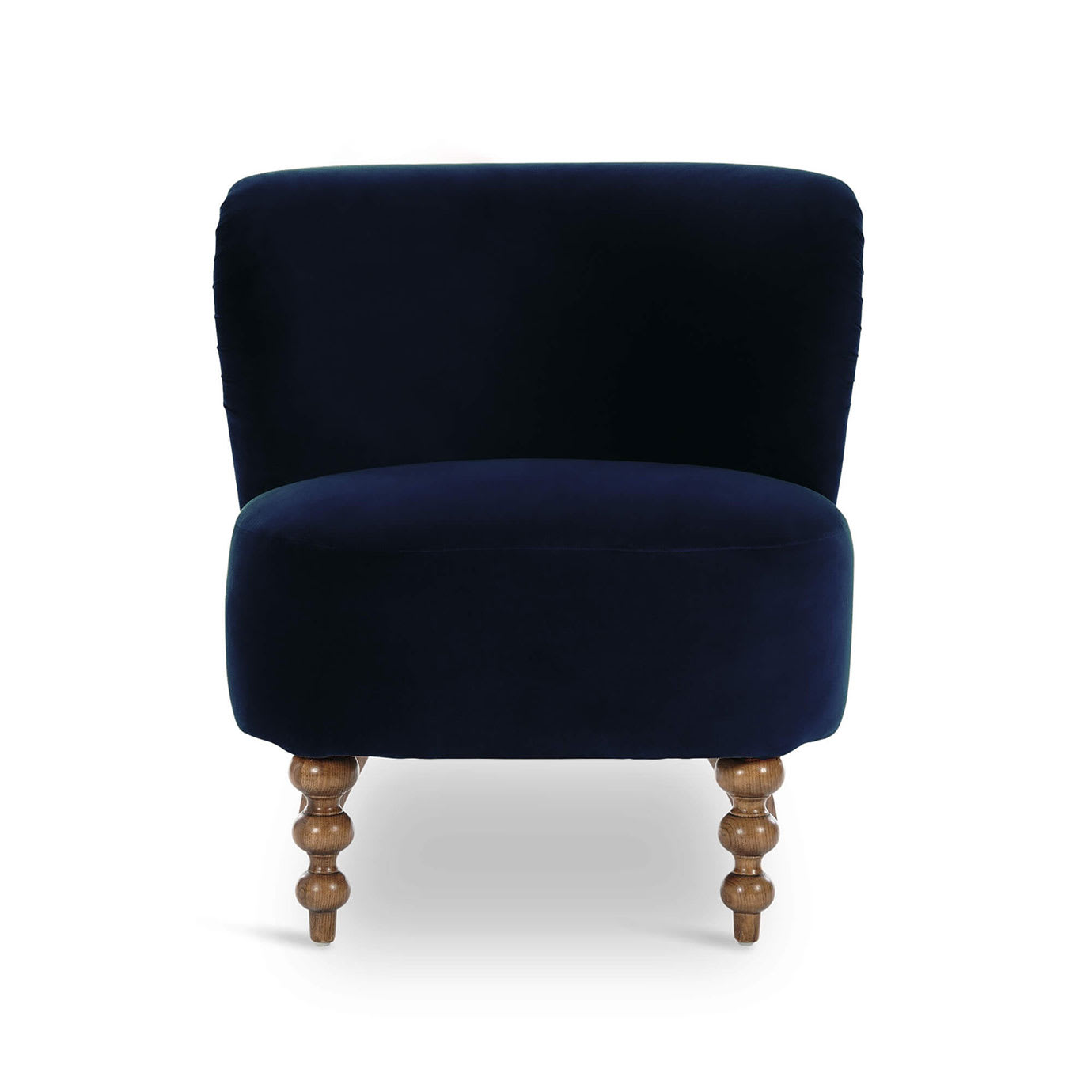 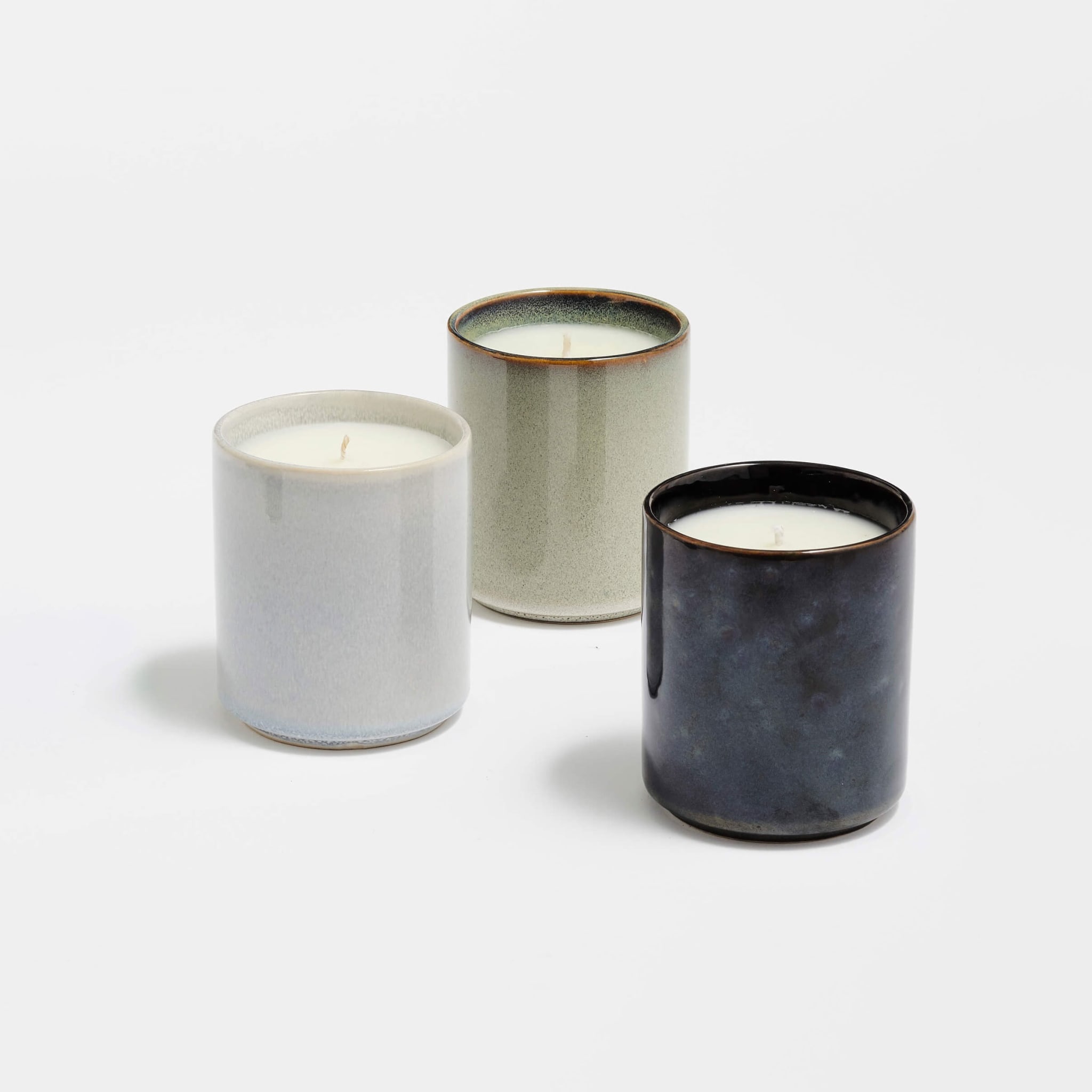